The title undoubtedly attracted football fans who opened the link to read with a shock controling them, but these people who are worried about Ronaldo should relax because the star of your Royal club is healthy; he wasn’t killed.

In fact the victim who was killed is a child from Palestine and specifically from Gaza. Gaza is the place where many athletes and children have been/will be killed. The number of the martyrs from the sports movement is over 400 martyrs and it will increase. The percentage of children among the over a half a million palestinians killed by Israel since 1948 is 30%

The martyr is a child, like all the children of the world, named Hamid Abu Daqqa (12-year-old) .
All what he was thinking of is going back home and watch the match of his favorite team and his favorite football player “Cristiano Ronaldo”

Hamid didn’t carry a gun or throw stones at the israeli soldiers; he didn’t expect that real madrid Vs. Borussia Dortmund would be the last match he’ll eargerly watch before the Israeli holicapters steel with force his dreams of meeting his favorite football player and watching his favorite team playing in the Santyako Bernabéu.

Deadly Bullet in the head provided by Israel to Hamid while he was playing football with the children of neighborhood. He was wearing the white Real Madrid shirt and in the back of the shirt there was the famous number “7” and cristiano Ronaldo’s name., , The purity of the child’s heart and purity of his white shirt were mixed with his own blood amid the screams of the agitated children and the people of the neighborhood who rushed to rescue him but it was too late; Cristiano Ronaldo just got killed.
The dream of the madrista boy is over and the owner of number 7 just took his last breath..
Hamid Got killed 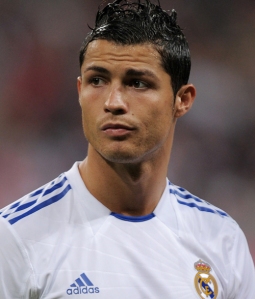 This entry was posted on November 10, 2012, 10:48 am and is filed under Uncategorized. You can follow any responses to this entry through RSS 2.0. You can leave a response, or trackback from your own site.